In this performance as part of Neuhaus, architect, composer and jazz pianist Murat Ali Cengiz turns a trusted Bauhaus method on its head: whereas in his years at Dessau Wassily Kandinsky used musical notation and scores as an inspiration and tool in his design classes, a hundred years later Cengiz is guided by design in writing and presenting an improvised composition. 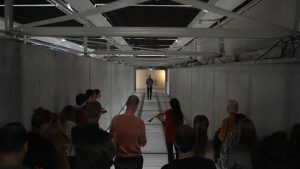 The debate about the relationship between music and architecture has a long and colourful history. Music, architecture and the visual arts speak a common ‘language’ in the use of patterns, textures, hierarchy, unity, contrast, rhythm, repetition, balance and space. They also share basic mathematical principles and graphical representations.

Since its inception in 2018, the Musicographics project has promoted experiments with alternative variations on the graphic language for writing music.

Among the compositions that have emerged from this project, which brings together visual artists and musicians, was a composition based on the design of the POST Rotterdam building, which was performed during Rotterdam Architecture Month earlier this year. 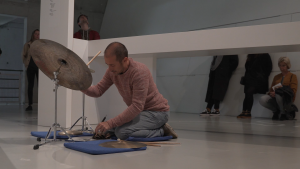 More background information on the concept of the ‘Musicography of Architecture’ can be found in Murat Ali Cengiz’s article that appeared in the Flemish magazine FORUM+ or on the project’s website.

The documentary of the project, directed by Adem Gümrükçüler, can be found in the link below:

Adem Gümrükcüler is a director/photographer from Rotterdam with an interest in architecture and urban layers. He intended to all process of #PostRotterdam with his cinematography and photography skills directing two-episodes of #Musicograhics at Post Rotterdam and Nieuwe Instituut.