Together with  director/photographer Adem Gümrükcüler, the Musicographics project was in the old post office building in Rotterdam for three days. Two of these days were during the construction works of the Rotterdam Architecture Month and the last was the day of the performance, with a piece composed by Murat Ali Cengiz, performed by Johannes Fend on double bass.

This edition of “Musicographics” was at the old post office in Rotterdam as a part of the Rotterdam Architecture Month #19.

The Post Rotterdam building has been empty for a while and is going to be transformed into a high rise hotel building. After studying on the acoustics aspects of the space and the history of its origins, composer and curator Murat Ali Cengiz recruited Johannes Fend to perform a a piece written especially for this space.

“As we arrived at the Post Office, the most dominant feeling was the cathedral-like reverb quality of the main hall. This was also the main reason I wanted to write a solo piece for a cello or double bass here. The next thing that took my eye was the mosaics on the ground (below)”. (Murat Ali Cengiz) 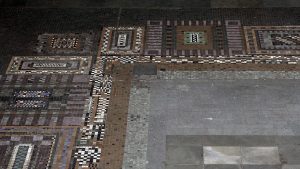 This quality of organic structures of the mosaics was the main inspiration for the musicographic of the composition (below). Murat Ali Cengiz, had the composition written in two parts using the history of the building as a source. It begins with the post office (telephone effect) then the war comes, then you have this empty forgotten space and finally it ends with the future hotel project (reception bell).

The whole process of composing and rehearsing at the location of the Post Podium was recorded and filmed into a documentary by photographer and director Adem Gümrükçüler. You can find this film in two parts at the links below.